In addition to anticipating an increase in bets on PC and mobile games, Sony also provided more information today regarding the stock shortage. For example, there are currently fewer PS5 consoles sold than when the PS4 was a year and a half old. Jim Ryan, CEO of Sony Interactive Entertainment, says this is down to supply, not demand.

For example, figures from the company show that around the end of March 2022 (the end of the fiscal year) three major US retailers sold about 80,000 PS5 consoles every 82 minutes, compared to nine days in the case of a PS4 of the same age. So there is a lot of interest in the new generation, although Sony cannot produce enough devices.

To meet this high demand, the manufacturer plans to increase production. During an investor presentation, Jim Ryan stated that a significant increase was planned, which would allow for capacity “that has not been achieved before.” The PS5 is expected to surpass its predecessor in terms of sales in 2023. If all goes as planned, more consoles will be sold in 2024 than the PS4 – when it was three/four years old. 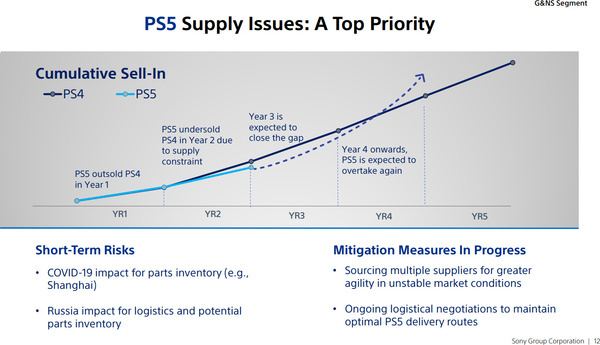 While Sony takes many logistical measures to keep the supply chain as stable as possible, there are a few factors that can lead to a wrench in the works. In the short term, Chinese lockdowns and the war in Ukraine could disrupt components and transportation.