Knowledge about Omikron is still developing. In South Africa as a whole, the numbers are still on the rise, but in one province the numbers are starting to fall. Using this data, a first comparison can be made between the pressure of care during the previous delta peak and the current Omikron peak. The latter appears to be causing a much lower healthcare burden at the moment.

In the county where the Omikron outbreak first started, infection rates have already fallen by nearly 40%. The wave of positive tests there has been smaller and shorter than at the time of the delta wave six months ago. The number of hospital admissions is also much lower at the moment.

For the main article on this topic, see here.

Today’s article is longer than previous updates. First, the main points in a nutshell: 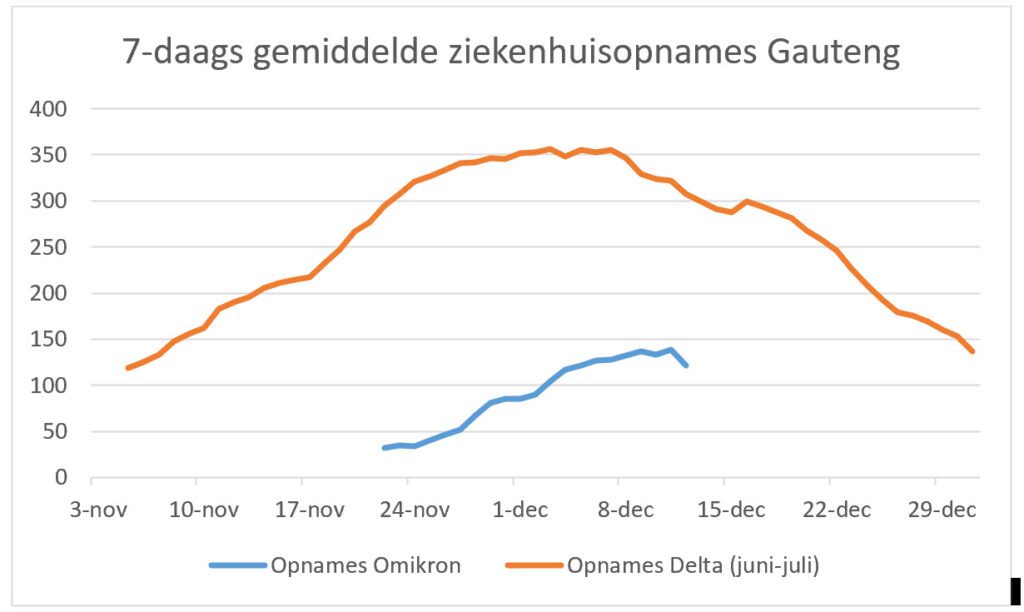 The blue line is the number of hospital admissions in Gauteng, calculated from the moment Omikron’s share of positive tests increased to about 20%. This line is now at or above the top. The orange line is hospitalization during a delta wave in Gauteng itself, six months ago.

Of course there are important differences between Holland and South Africa: it’s winter here, the population is older and 75% of the total population is pollinated, instead of 26% there. So there is a risk that the numbers will get worse here. or better.

See also  UWV has given 1,200 people a very high interest, but they don't have to pay it

At the same time, there is a certainty that these actions will lead to many problems or make them worse. So a decision must be made.

The above risks are real and inherent in any new virus/variant. For virologists, this is a professional source of constant concern, but until a couple of years ago they were ignored and life went on for the rest of us.

The number of new cases in South Africa continues to rise. Although the rally in the chart below is still sharp, it has not been exponential since Dec 5th. The numbers for December 17 seem to flatten out more, but because of the Day of Atonement, December 16 was tested unusually and December 17 was between the national holiday and the weekend. So it is still too early to talk about a change in direction. 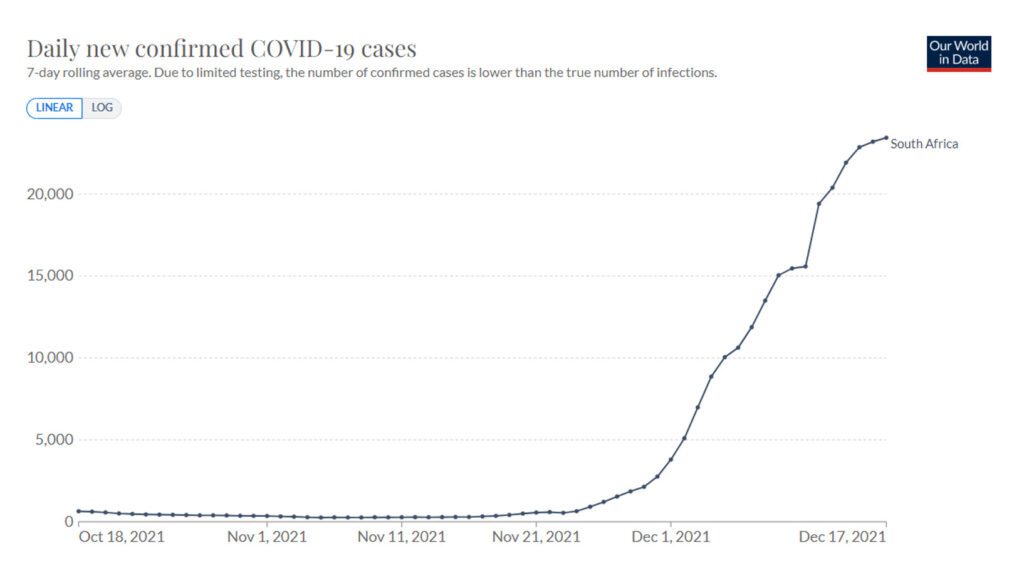 South Africa is a large country, with a population of more than 60 million people. It is divided into provinces. Gauteng is by far the smallest geographically, but is home to 15 million people – a quarter of the population. It is also the most densely populated. 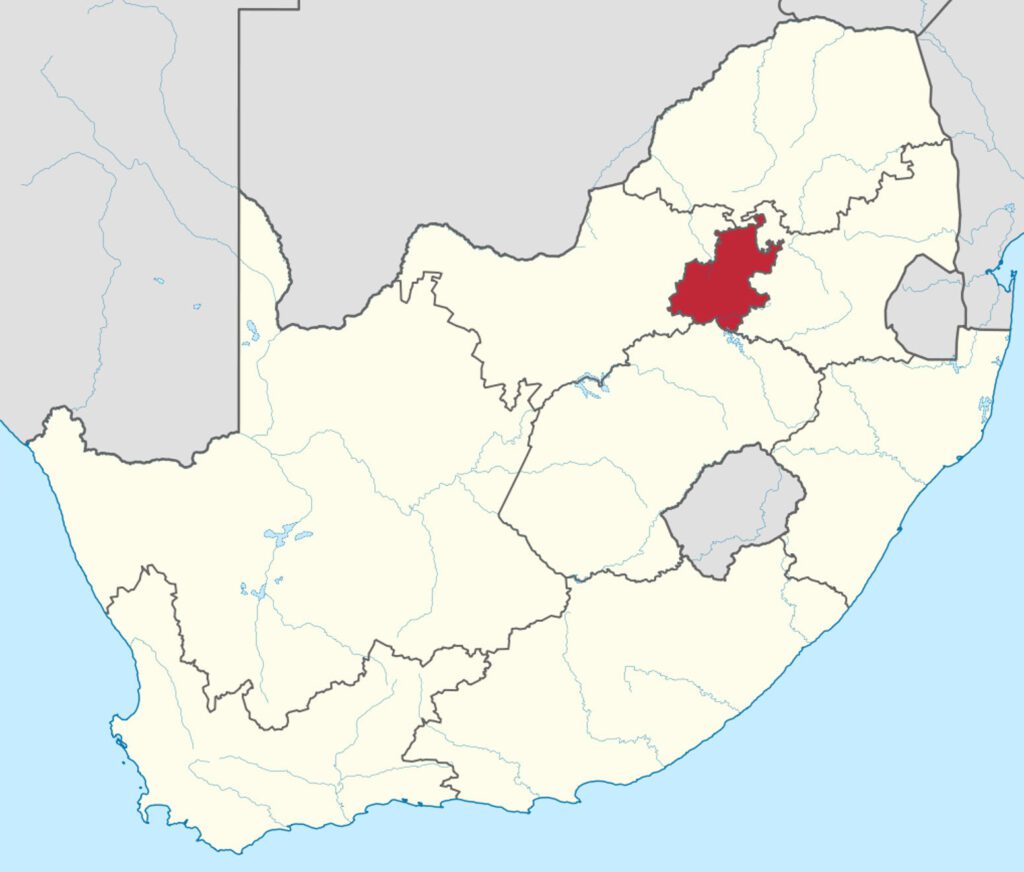 Gauteng was the first province in which the Omikron broke out on a large scale. South Africa reports cumulative number of cases by region here. This makes it possible to calculate the number of newly reported cases per day for each county. The 7-day average is plotted in the graph below: 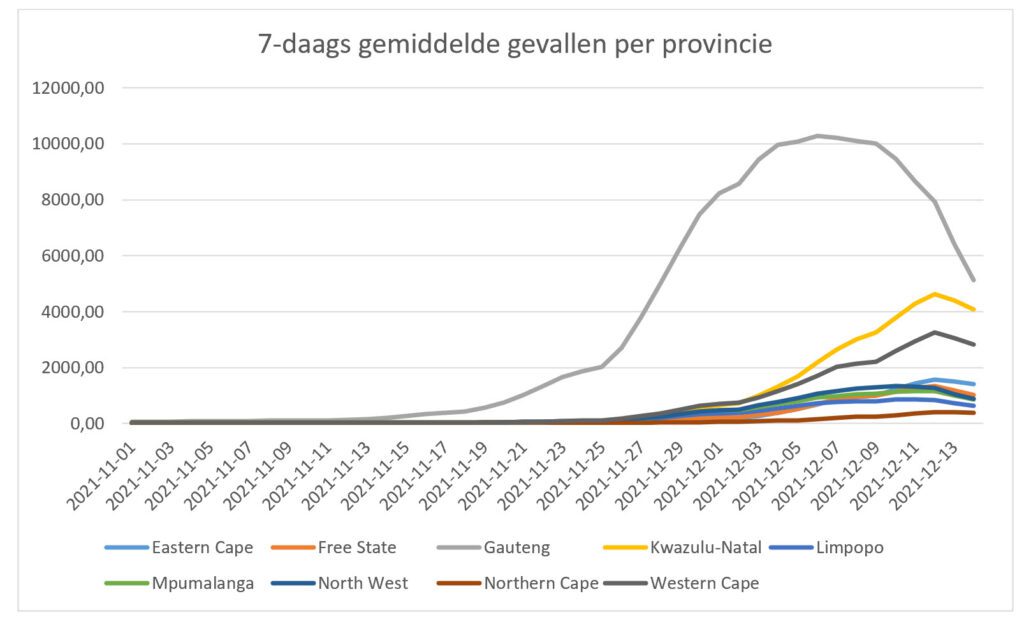 The last days in this chart are still being rolled out, and therefore overly optimistic. But now, based on this data, it is clear that the number of reported cases peaked on December 6 in Gauteng and has been declining since then.

In Northwest County, the number of cases appears to have peaked on December 10 or 11. Mpumalanga and Limpopo seem to have peaked. This will become more evident in the coming days. In other provinces of South Africa, outbreaks started later and numbers are still rising.

It is now also possible to compare Gauteng’s Omikron peak with previous corona peaks. Despite the phenomenal speed at which this new variant is spreading, the Omikron’s peak is below the delta peak six months ago. And of course smaller.

The most likely explanation is that a smaller percentage of people with omicron are tested. For all of South Africa, the Omikron peak is higher than that of the Delta, because the new shape has spread more quickly across the country. As a result, there is more Omikron overlap between the peaks of the different provinces, which therefore adds up. 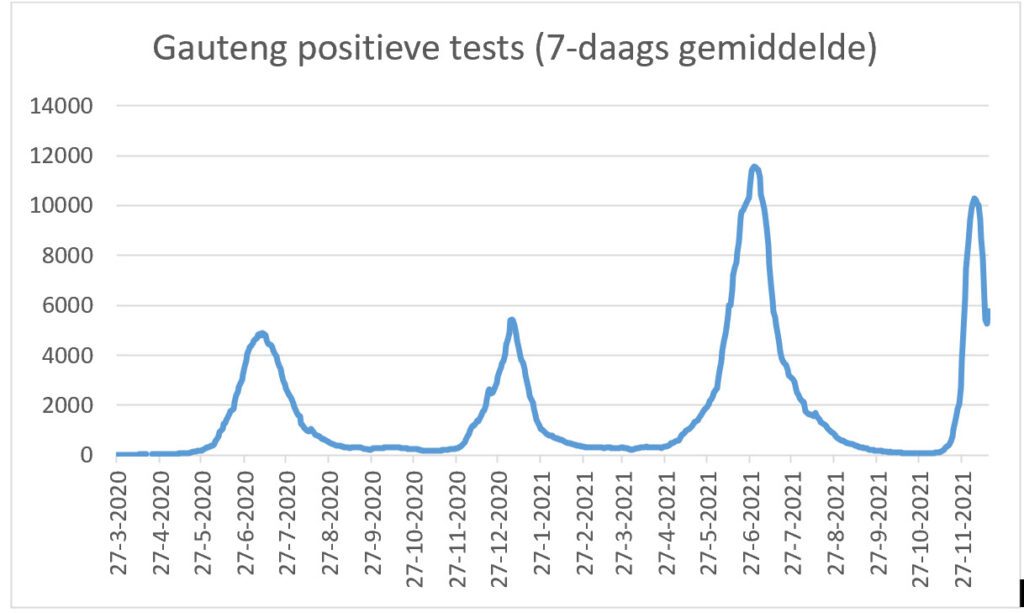 The number of hospital admissions per day can be found on the second page of the daily reports this page. Yesterday’s numbers were not updated at 9:00 PM today, so the graphs are the same as yesterday.

Average number of hospitalizations in Gauteng over 7 days: 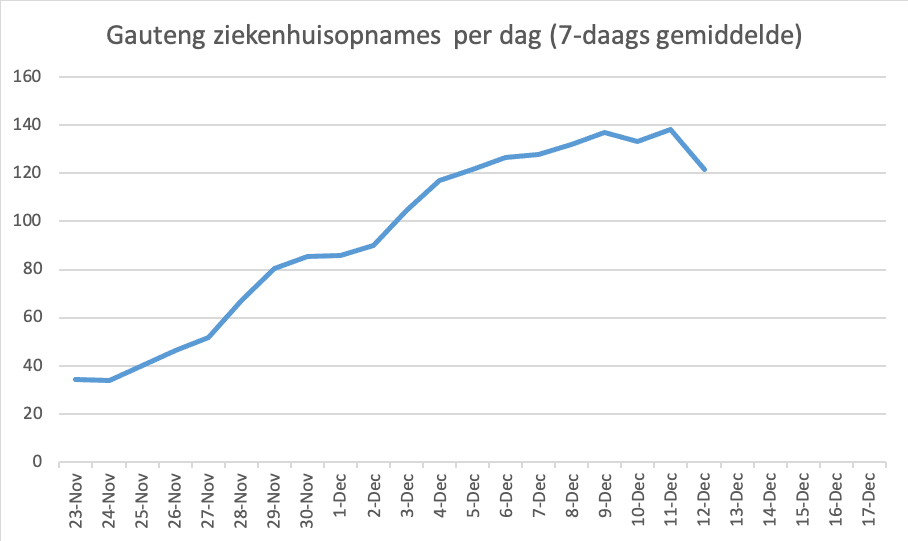 The apparent decline on December 12 is likely due to the Day of Atonement, at least in part.

After peaking in the number of admissions per day, occupancy continues to increase for a few days, until the patients who came at the peak are discharged again.

The delta variable peaked in South Africa during the first half of July, Omicron in December. The charts below show the difference in care bed and intensive care unit occupancy in Gauteng, between July and December: 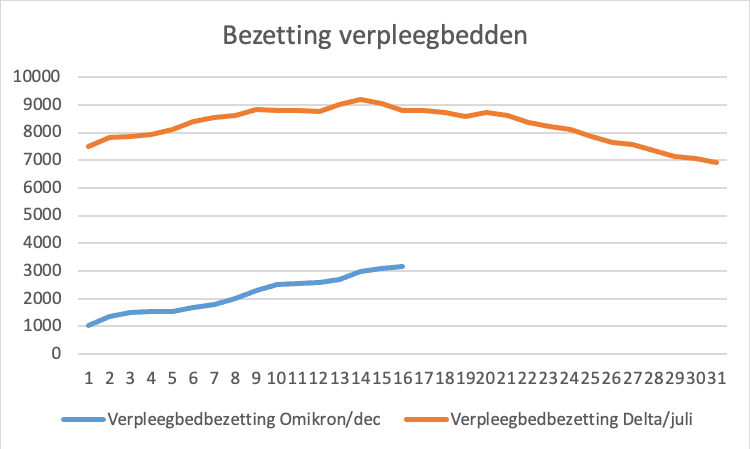 Meanwhile, Omikron’s share in Europe is also increasing. Denmark loves here Clear overview (thanks to Nicole for the link). Based on these data, the participation of Omikron can be compared with the average number of cases of HIV infection over 7 days: 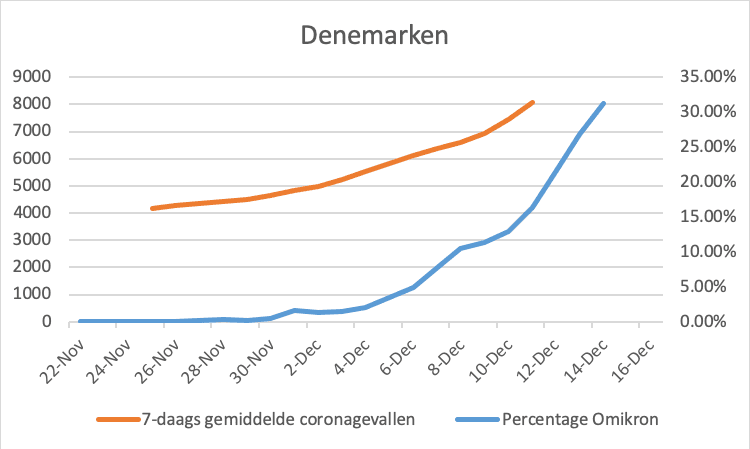 Based on these numbers, the increase in the number of coronavirus cases is only partially attributed to Omikron, and the number of delta cases is increasing exponentially. There are two possibilities: either *something* has boosted Delta, or Omikron’s share has been underestimated.

Assuming that at least as many people were infected in Gauteng at peak Omikron peak as at delta peak time, a smaller proportion of infected Omikron were tested. Presumably, because the symptoms are milder. This may lead to the systematic underestimation of Omikron’s share.

But with 31% on December 14, it seems likely that Omikron is now dominant in Denmark.

In terms of season, demographics and vaccination coverage, Denmark has more similarities with the Netherlands than South Africa, so it is likely that the course in Denmark is a better indicator for our country in this regard.

Despite the apparent upward trend in the number of cases in Denmark since the end of November, the number of hospitalizations appears to be stabilizing rather than increasing dramatically. With reservation, because this report is later than the rest of the figures. 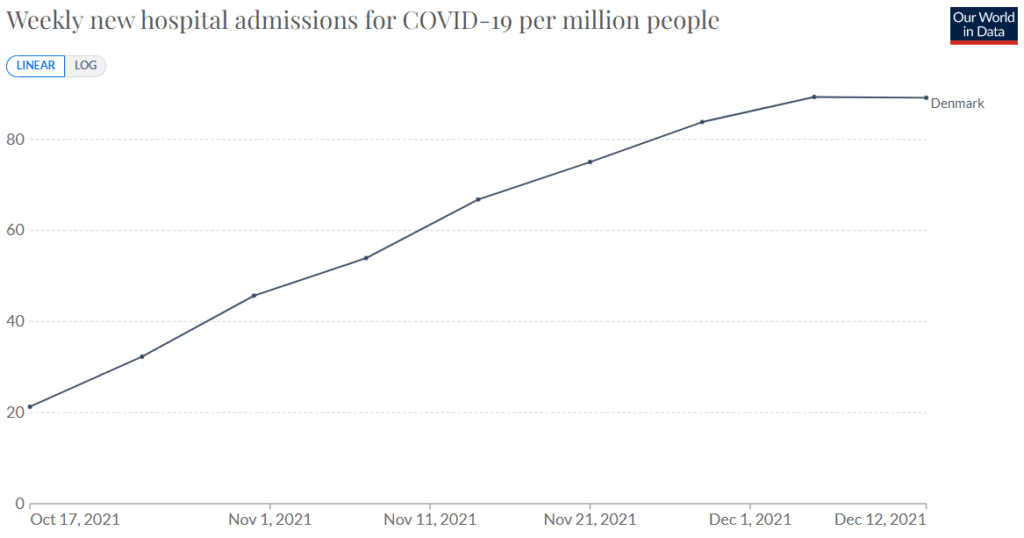 The end of the yes-no stickers on the letterbox: a digital system on the way 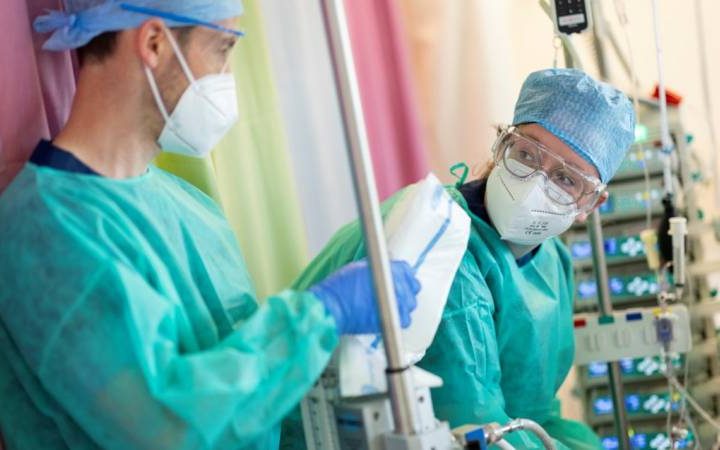 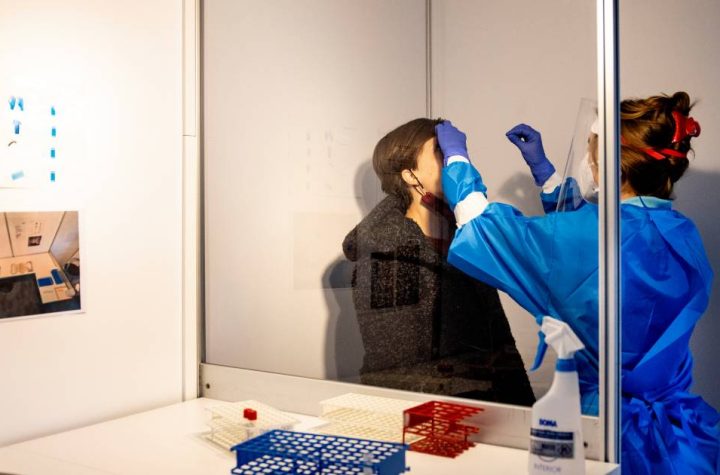 More than 1,100 new cases of corona in Twente and fewer hospitalizations in hospitals nationwide | Corona