The first half of 2022 has proven to be a momentous year so far for soccer in the North American region and you can bet your bottom dollar there will be more to come as we kick off the second period.

A year that started with the expected men’s World Cup finals qualification for two regional heavyweights – and the completely unexpected qualification of a regional soccer minnow – will end with those sides battling it out on the biggest stage in the sport. However, we have also witnessed a thrilling Women’s International Championship and CONCACAF Champions League history made. There is certainly an awful lot to get through, so let’s start from the top…

Canada produce to upset the odds

North American soccer fans usually know what to expect when it comes to World Cup qualification, but there is still the occasional surprise to upset the odds, which is why the use of betting calculators can be beneficial to those who wish to wager on such outcomes. As this comprehensive guide on how to use a betting calculator explains, they allow you to input your stake and odds to generate an instant calculation of the payout for your bets – including free bets.

It is a tool that can handle any payout calculations from any bet within seconds, even those surprise bets that would have been placed on minnows Canada topping the qualifying group for the finals in Qatar this winter!

The familiar story of two regional heavyweights – the United States and Mexico – once again confirming their places at the finals was the most obvious choice, and that indeed is what transpired. But the two giants of the sport experienced the unfamiliar sight of a hockey-loving nation making history to beat them to the top spot, thanks to the thrills and skills of hot European-based stars like Alphonso Davies and Jonathan David.

Having progressed through two qualification groups to make it to Qatar – a rare feat in the history of the North and Central Americas region – John Herdman’s exciting team will have no fear once the main event gets underway.

Big two battle it out for the ‘W’

Although the Canadians are not anywhere near considered a powerhouse in the men’s game, their female counterparts are Olympic champions and regularly do battle with arguably the world’s best women’s side, the United States, to claim CONCACAF W Championship glory.

Indeed, this month’s competition in Mexico proved to be more of the same, with the two northern neighbors reaching the final in which the US came out on top thanks to a late Alex Morgan penalty. Between them, the US and Canada share 11 tournament wins and six runners-up medals, so it was no surprise that they reached the final once more.

The tournament also acts as a qualification phase for the Women’s World Cup and the Olympic Games and so the cycle looks set to continue for these two big names in the women’s game.

In the domestic game, further history was made in May when Seattle Sounders became the first US side to clinch the CONCACAF Champions League since its rebranding in 2008 – finally ending the Mexican dominance of the competition.

Mexican clubs had won the previous 13 finals, nine of which were all-Mexico matches, but the Sounders defeated UNAM by a 5-2 aggregate scoreline this time around to provide a remarkable boost to an otherwise underwhelming MLS season so far.

Brian Schmetzer’s charges currently lie outside the play-off berths in a Western Conference led by a somewhat star-studded LAFC, but with a little under half the campaign remaining they will feel they have enough in the tank to break into the postseason rounds. 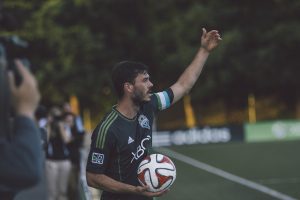 So there we have it – an action-packed year already for soccer in the North Americas, and with plenty more to look forward to before the year is up. The recent announcement of the 16 venues for the expanded World Cup in 2026 has added further excitement for the game on our shores. We cannot wait to see what the near and distant future holds…

After 246 years, a black officer holds the highest rank in the US Navy

A US billion investment in climate is one step closer

ANWB can’t keep up with too many crashes in Europe: ‘Very disappointed’

Daily Horoscope August 8 – The week is off to a good start, Sagittarius! | constellations