Pokémon Scarlett and Violet have been talked about a lot, mainly due to technical issues. Part of that has already been resolved, but the game will still run mildly on Nintendo Switch. This is unfortunate, because other games show nice improvements and innovations in various areas. Old systems have been updated and some of the new elements, like the fact that there are now three main missions, really add up. The more open world design is also great, because exploring Paldea has something of a sense of adventure and relaxation to it. It’s hard to follow the right path through the areas, so that you sometimes end up in areas that are too high, but in the end the balance is positive. For example, Scarlet and Violet are nice additions to the long-running and still relevant franchise.

A while ago, a discussion arose in the comments under review about what a role-playing game, or RPG, actually is. Although you play a role entirely in the story in an Xbox Pentiment game, and the way you fill it in also affects the story, this game does not really meet what we understand today as an RPG. Fairly or unfairly? The answer to this question depends on which definition you want to use. Based on that, you might consider any of the RPGs you’ve played over the years. As you think of The Witcher, Knights of the Old Republic, and Dragon Age, you might be forgetting a game that also qualifies as an RPG and that you’ve probably played more times than you care to admit: Pokémon. Red, Blue or Yellow Old Version is one of the first open-world RPGs. In recent years, we’ve seen the old recipe in a somewhat newer jacket, with Pokémon Scarlett and Violet as the most recent examples.

Pokémon Scarlett and Violet share many traits with their long list of ancestors. As with every dual release within the Pokémon franchise, we’re talking about two games that are almost the same, as the range of pocket monsters varies. As always, you will have to trade with other players if you want to complete a Pokédex in the game. This, in addition to playing through the story and building the strongest possible team of Pokémon, is, as always, a goal in itself. But with Scarlet and Violet, things that were different decades ago have changed.

Of course, this starts with a new area. The new Paldea region appears to be loosely based on the Iberian Peninsula, which is also reflected in how the characters speak in the game. Even if you play the game in English, sometimes you’ll get a Spanish word in between. In Paldea, you’ll also encounter essential Pokémon known and new, including starter Pokémon Quaxyl, Fuecoco, or Sprigatito. Your choice doesn’t matter much: every basic type of Pokémon can be discovered early in the game. We like Fuecoco’s selection, but it feels less important than it might have been in previous games.

Lots of creatures around you

This is due to two important differences between Pokémon Scarlet and Violet and the somewhat older games. First of all, the days of busting through tall grass to find Pokemon are over. Just like in Pokémon Arceus, you’ll see the creatures roaming around freely. If you’re hunting for a specific type, you don’t have to wander randomly around where you hope to happen: you can just look around and walk toward the Pokémon you want to catch, while your Pokémon that don’t interest you can dodge. This makes building a balanced team much easier and above all faster: by the time you get to your first gym, you already have a good counter for almost all types of Pokémon.

Another difference is that the moment you get to the first gym is not fixed. More than in previous games, the world of Pokémon Scarlet and Violet is completely open. So you can set a path on your own and that path does not automatically pass, as in the past, at the right gym at the right time. This looks more fun than it is. Due to the lack of guidance, you quickly end up in areas where the Pokemon are very strong. You suddenly notice that the Pokemon trained in that region have a much higher level than your creatures, and if you successfully catch wild Pokemon in that region, they probably won’t listen to you: the badges you earn after all in gyms also make sure the Pokemon are high level He listens better to your commands. There’s no way to know which way to go to tackle the next logical gym and that can be very difficult.

The positive downside is that the more open style of the game also invites. In a way, it’s also nice to walk around and be surprised by powerful Pokemon. You can also see when you’ve reached a higher region, because that’s when you suddenly see Pokemon evolutions roaming around, which you saw the regular version of a little earlier. Besides, the next gym doesn’t always have to be the next most logical destination. This time, there’s more to it than just beating eight gyms and some elite enemies to become the champion. Pokémon Scarlet and Violet have three main missions, which will then follow in the closing part of the game.

Among the main tasks, Victory Road is the one with popular content: this is your journey through gyms, the Elite Four and the region’s champion, to prove that you are the best Pokémon trainer. The other two missions are more interesting. In Path of Legends, you’ll be searching for five Titan Pokémon that ended up in Paldea under mysterious circumstances. Then there’s Starfall Street, a mission all about foiling a Star Team. This slightly sinister presence in Paldea is of course reminiscent of the old Team Rocket, although their background is different and the story around it is much more fun. Each of the three main missions has specific areas or places you need to go to in order to progress, and you’re free to choose whatever arrangement you want, as long as it somewhat matches your Pokémon’s level.

See also  We will see the Cosmic Crown Jewels on Tuesday

As you go on an adventure in Paldea, you will also learn how to deal with the new systems in this game, or rather: the changing systems. We’ve finally said goodbye to unnecessarily cumbersome operating systems. For example, you can now access your collection of Pokémon anytime and anywhere, so you can always change the composition of your team. You can also return to previously visited Pokécenters from anywhere in the game world, and this Pokécenter also doubles as a store and a place where you can unlock new attacks, which you can then teach your Pokémon to. The game has a much-needed simplification, which improves the gameplay. It ensures that you can venture without any worries and if you don’t feel like it anymore, you can quickly go in another direction. 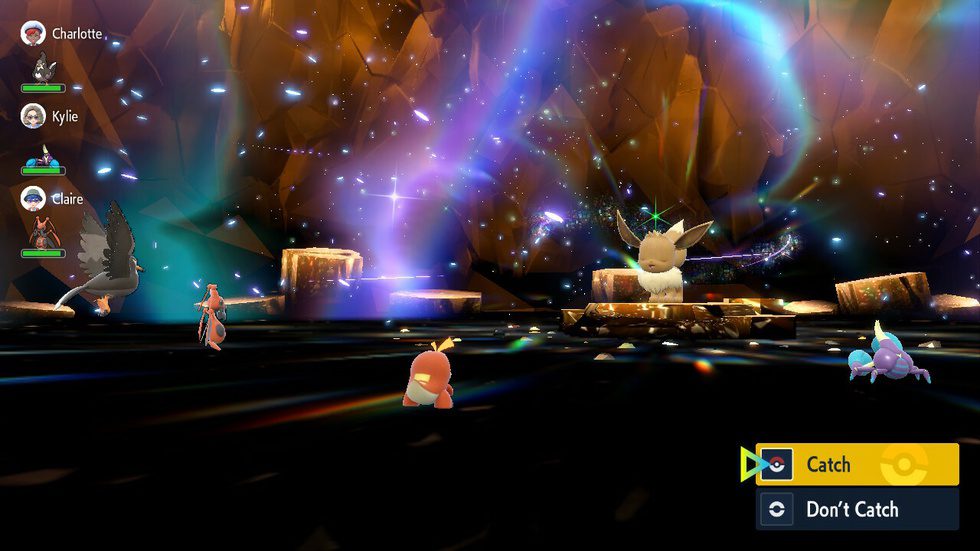 Not only have Pokémon Scarlet and Violet improved upon the old systems, but there are also some new components. For example, the new Terastal phenomenon. This phenomenon means that a Pokémon can change into its own Tera-type thanks to special crystals. In this form they are stronger and sometimes have special attacks. As a player, you can also change your Pokémon to Tera type once per battle, which can definitely come in handy in more difficult battles. You also occasionally come across a crystal formation in the game world where Tera Pokémon are hidden. You fight this with a group, where you can decide for yourself if you do it with AI coaches or with real players. This aspect is somewhat similar to Raid Battles from Pokémon Go. It’s a nice addition, but it’s little more than something that plays a major role in the game. The same applies to other items, such as the ability to create food from ingredients that make you and your Pokemon stronger. It helps, but we hardly used this game element and never lost it.

Terra Battles also includes some special effects. They feel pretty over the top and maybe they are meant to be. Pokémon Scarlett and Violet are the hottest ones here. Some of the environments are nice, but the overall graphical level of the game is not that high. The environments are cluttered and more empty than we’re used to from games in 2022. The animations of the Pokemon themselves are something, but graphically the game doesn’t make much of an impression.

This automatically brings us to the more technical side and the game doesn’t do very well in this area. You will notice that many players online have complained about the technical condition of the game. Let’s start with the good news: steps have already been taken in this direction. For example, we have not fallen through the map and have not had any accidents. However, this does not mean that the game is now working like a charm. The frame rate is low and sometimes it drops so much that characters in the game world visibly “jump” from one place to another. Character rendering is often very slow, so other trainers sometimes suddenly appear in front of you.

We’ve read all kinds of opinions on this last point, from “unforgivable because it works so poorly” to “well you can’t expect more from Switch”. There is an element of truth on either side. Mainly what it comes down to is whether or not you can skip it yourself. Especially when you’re wandering around on your platform, the image stutters every now and then, and the time it takes for the game to release new Pokémon from its Pokéball sometimes seems too long. This is still a fun Pokemon game. The improvements and innovations are working fine. It especially looks like this game could use a few more months of optimization, though we naturally assume that would help, too. Anyway, technically Pokémon Scarlet and Violet leave something to be desired and that’s a shame.

So we close on a negative point, but our opinion of the whole game really leaks through that paragraph, because we had such a great time with Pokémon Violet. The game mixes a recognizable base and associated parts with a number of new elements and this works well. It’s nice to be able to focus on multiple tasks. The stories are transparent at times, but they lead to fun moments and battles with Pokémon that you don’t come across every day. However, the best part is that you can explore Paldea freely. Walking around on your platform, looking around to see if you see any interesting Pokemon, items or trainers, almost gives you that “zen” feeling. At the same time, the lack of guidance is a problem, because you quickly end up in an area with very strong Pokemon and it’s not clear where you should return to an area with the right level. This, along with the questionable state of the game on a technical level, is the main thing to criticize about Pokémon Scarlet and Violet. We see no reason to advise against the game on these grounds: it means you might be going through the best Pokémon game yet, but it clearly could have been better.